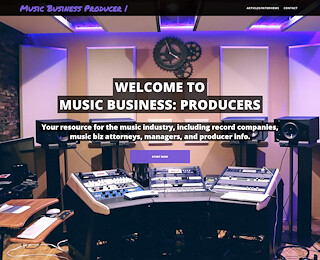 What is a music producer manager?

Simply put, a music producer manager is in charge of managing music producers. They help represent your interests as you try and make a name for yourself in the music industry. Realistically, the daily tasks of a music producer are very time-consuming. Hours are spent trying to come up with new beats or write unique lyrics, it leaves you with little time for anything else.

As such, you may not have time to deal with bookings or deals. Thus, you miss out on potential career-making opportunities, and you can get scammed into earning far less than you deserve. A music producer manager ensures none of this happens. They help manage your career while you focus on the music. As well as finding you the best opportunities, they also create a competent team of professionals to help you as well. This includes hiring booking agents, an attorney, a financial manager, etc.

Does everyone need a music producer manager?

Technically speaking, no. Not every music producer needs a manager. In fact, it's only really essential when you have a record deal. Here, your music producer manager works as the middle-person between you and the record company. As mentioned earlier, they represent your interests and speak for you.

Having said that, if your career is struggling to take off, then hiring a music producer manager can help you finally get the record deal you've been after.

What are the benefits of a music producer manager?

Having a manager will bring a range of benefits to you. Firstly, you can maximize your earning potential. They identify new opportunities and work with your agent to ensure you get the best deals possible. Also, they communicate with the record company, which can help you negotiate new contracts and become a bigger earner.

Aside from the financial benefits, they also open more doors for you. Music producer managers will have connections throughout the music industry. In fact, they may represent other producers or know other artists. As such, they can pair you up with artists to create a big hit that generates more recognition for you. They could also help you find new record deals if the current one isn' quite up to scratch.